N.B. People Decide is no longer running in government elections.

Jnana developed and provided expertise and advice to People Decide (PD), a project and campaign to form a participatory democracy government, a form of democracy where the people have greater voting power on the issues being debated. PD's model is mix of representative, deliberative and direct democracy. The aim is to form a more representative, effective, stable and efficient form of government. Its platform is based on open-source software.

Jnana developed the PD structure, participatory democracy model, IT voting platform and election campaigns all of which have gone through many evolutions.

The model is a process involving MPs, Senators and Councillors contracted to vote with the majority of the people in their electorate on at least single issue Bills and decisions in Parliament and Council. People must read a summary of a Bill or decision developed by the people before they vote and have six weeks to consider it to ensure an informed vote. 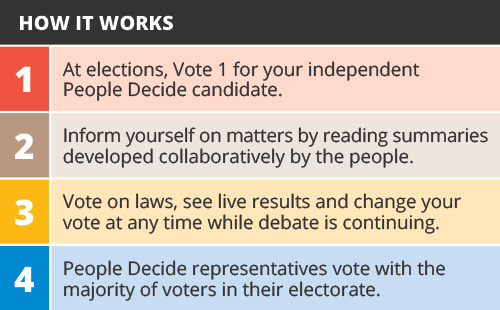 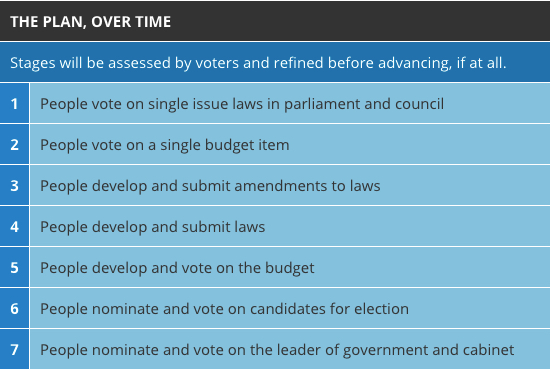 The development of the summaries is currently under testing.

The IT voting platform is at version 3.0. It now automatically verifies voters and draws all Federal, State legislation and Local Government Impact Assessment Developments into the system.

The code is open source with additional terms and conditions to ensure it is used for ethical purposes.

Karel Boele, Director Jnana, was the main candidate for PD.

In 2017 Karel had self-funded five grass-roots elections in a row over five years and single-handedly door-knocked nearly the entire South Brisbane electorates, raising awareness about participatory democracy. The PD vote kept increasing until the last. The last election was the first election PD actually tried to get elected and spent more money. The model was refined and the campaign more professional. The vote should have at least increased marginally, however, it did not.

This caused a review of the PD campaign. At this point it was decided to end the campaigning aspect of PD.

* Please be cautious of other participatory democracy platforms that may be complex, allow the voter to pass on their responsibility, unorganised, not well thought-out and / or have self-interest. Look for a simple, well thought-out, makes the voter the only one responsible for their vote and one-step-at-time approach.

See more about the tour here.

Other work in political development